In 1953 the Macdonald Brothers, Charlie and John opened the Crest Hardware Store in downtown Meaford. Through hard work and great community involvement the brothers prospered and in 1970 the store became part of the Pro Hardware family and continued to grow. In 1974 they expanded by opening a hardware store in Collingwood and then expanded even more in 1979 they opened the new furniture store on the outskirts of Meaford. Phil joined the team on a full-time basis in 1975 and ran the Collingwood store. With the growth of the furniture store, the family decided to focus on the Furniture business and in 1979 they sold the Collingwood store and the Meaford hardware store followed in 1983.

The reputation of Macdonald’s of Meaford continued to grow, the original brothers retired, although Charlie continued working almost as much in retirement as he did while on staff. The Macdonald family outgrew Meaford as the second and third generations took control of the operation. Lindsay joined the family business in 2007.

In 2010 Phil and Lindsay left the original family business behind and opened Leon’s franchise in Collingwood. Matt Macdonald returned from his time at the Kitchener Leon’s store and from a standing start in 2010, the three new partners grew to become the Franchise of the Year in 2013.

In 2014 the partners made the bold decision and successfully gambled to acquire Leon’s franchise in Owen Sound. Over the years the Beattie’s and Macdonald’s had been friendly competitors dating back to the 1950’s when the Beattie’s operated Beattie Feed and Farm Supply at Balmy Beach. Like the Macdonald’s, the Beattie’s became a Pro Hardware franchise and then in the 1980’s moved into the Furniture business. As with the Macdonald family, the Beattie’s provided personal service and competitive pricing with a sense of pride. 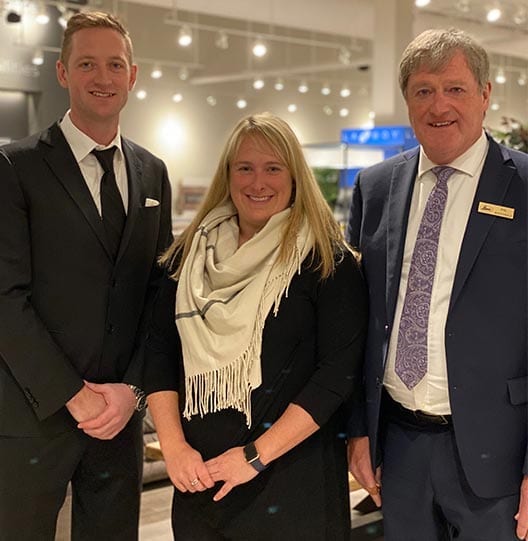 The combined sales volume of the two stores made the new organization the third largest franchise in the country and it has grown even further. In 2017 we became the largest franchise in Canada. The efforts of the associates and ownership were recognized again in 2015 with Collingwood winning franchise of the year again, and then Owen Sound in 2016. In late 2017, we expanded again, purchasing the franchise in Orillia from Bill Brown and his family. The Brown’s had operated the very successful store in Orillia for twenty-five years.

Moving into 2018 and beyond, we feel that the combination of the three stores, places us in an excellent position to serve the people of Simcoe/Grey/Bruce and now Muskoka, to fulfill a vision similar to the one Charlie had more than 60 year ago.